In 1977, the Porsche 928 came onto the market with a bang. A Gran Turismo with a futuristic yet timeless design. This touring sports car of a bygone era has bequeathed its DNA to the Panamera. And in particular the Panamera Turbo. We take to the road with these soulmates. 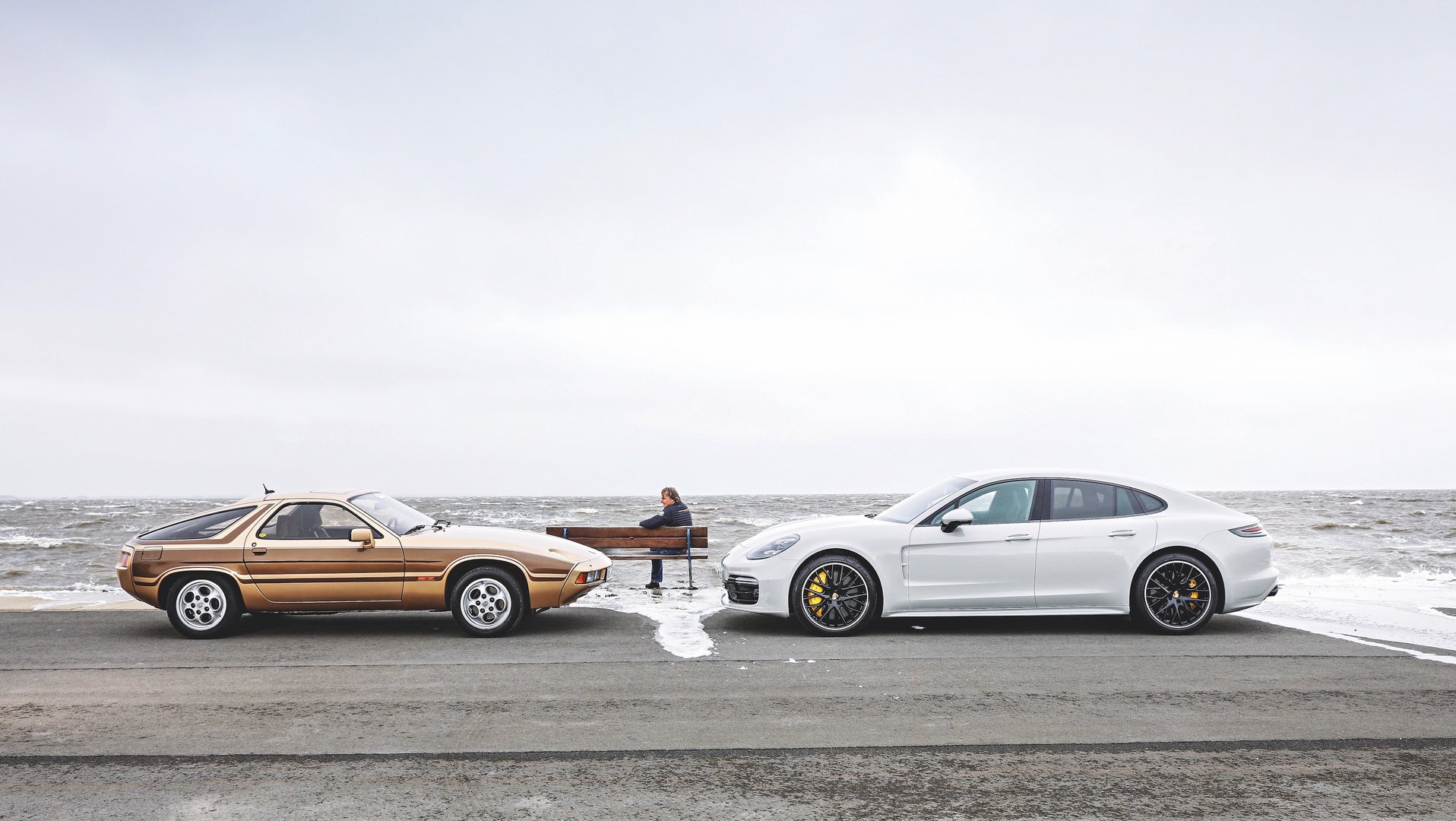 This 928 looks like the embodiment of the 1970s. Gold and brown. It brings back memories of John Travolta and “Saturday Night Fever”. Of listening to a cassette recording of the Bee Gees singing “Stayin’ Alive”. The series was presented in 1977 at Lake Geneva. It was the world première of a new Gran Turismo. A design from the future. Created by Wolfgang Möbius. And it cost at least 55,000 German marks. A short while later, someone from the German radio station NDR had the money and the guts to buy this spaceship-like car. In 1979, he purchased the 928, drove it for a brief period and then sold it shortly thereafter. The reason why remains a mystery. The second owner is a young businessman from Oldenburg. It’s a car that will last him a lifetime. It travels with him down the years. And it is still by his side. The young man has long since become an elderly gentleman, and the car of the future has become a classic of the present. But neither of them gives the impression of being old. In autumn 2017, the old (yet young) man hands over his old (yet still young) car to us, so that we can compare it to the modern-day Porsche Gran Turismo – the Panamera.

Forty years have passed since Porsche premiered the 928 to the world at the Geneva Motor Show. It was the sports car manufacturer’s first model with an eight-cylinder engine. A revolutionary concept. If it had been positioned directly as a more comfortable and spacious alternative to the 911 rather than its successor, the world at large would have immediately recognised it as a brilliant reinvention of the large touring car. That was not the case. The difficult relationship between the 911 and the 928 has often been recounted elsewhere, and need not trouble us here. That tale has already been told. We also now know something which no one could have known while the 928 was in active production: Anatole Lapine’s design is timeless. The achievements chalked up by the 928 include the fact that it was the car of choice for the late, great Steve Jobs. Perhaps he would drive a Porsche again if he were here today. The Panamera - a modern Gran Turismo. Following in the footsteps of its soulmate, the 928. Both of these Porsche models are powered by a V8 engine: the 928 in all versions, and the Panamera as a Turbo. Two different Gran Turismos and two different eras, but the same DNA. They could equally well have given the name “928” to the Panamera.

A dream car which bears little sign of the passing years

Our 928. The first owner ordered a three-gear automatic transmission, a steel sunroof and electrically adjustable seats. Unlike many early 928 vehicles, the fittings of this 1979 model still display no cracks. A dream car which bears little sign of the passing years. The engine at the heart of this vehicle is a 4.5-litre V8 delivering 240 hp. In figures? Zero to 100 km/h in 7.8 seconds and a top speed of 225 km/h. Placing the engine on the front axle and the transmission on the rear axle – known as a transaxle design – ensures optimum weight distribution with a ratio of almost 50/50. The Weissach rear axle is a trailblazer. The wings, doors and bonnet are made of aluminium. 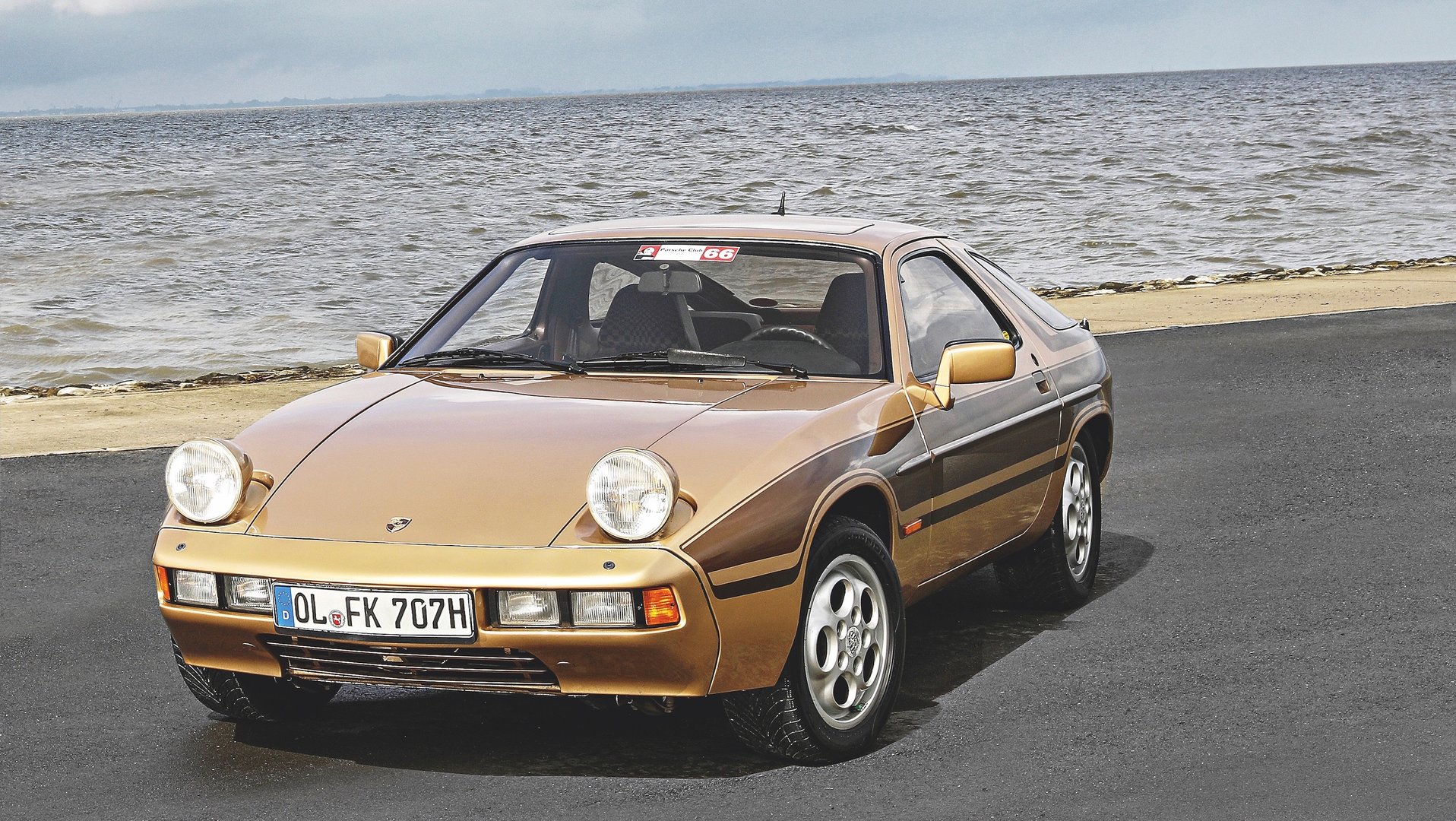 Our Panamera. The second generation of the sports saloon looks to the 911 in stylistic terms, but the long bonnet and round rear end clearly reference the 928. All Panamera vehicles pack a punch in terms of high-tech features: the Turbo features all-wheel drive, three-chamber air suspension and electro-mechanical roll stabilisation as standard. The 928 made history with its self-steering Weissach rear axle; genuine rear-axle steering is optionally available in the new Panamera as a modern counterpart. This shortens the wheelbase and ensures that the Porsche feels as agile as a 911. But the pièce de résistance is the four-litre V8 engine with twin turbochargers, which work together to produce an output of 550 hp and 306 km/h. The loaded vehicle takes only 3.6 seconds to get to 100 km/h – a feat not even managed by the 996 Turbo S.

But let’s get back to the 928. The first unique feature is an ignition switch on the right-hand side of the cockpit, the height of which is fully height-adjustable. The sports seats are reminiscent of the “Starship Enterprise”. The hand brake lever is to the left-hand side of the driver’s seat. On the other side, the automatic selector lever dominates the centre console. The car has an unbelievably spacious feel – you can stretch your left leg out almost to its full length alongside the brake pedal. The rear sun visors, positioned at approximately the same level as the tailgate hinges, are a curious feature. They stop the rear turning into a greenhouse when heated by the rays of the sun.

Let’s turn the key in the ignition. The 928 comes to life, as evidenced by unmistakable mechanical noises in the powertrain. It takes a deep breath and gradually picks up speed. The selector lever for the automatic transmission is pulled back through the gear selector gate like the throttle of a Boeing. With an unladen weight of approximately 1.5 tonnes, the Porsche does in fact feel like a fully laden passenger aircraft during acceleration – but one which picks up the pace at an astounding rate after a certain point. As though we were on a runway, the vehicle travels ever faster and pushes forward, before finally reaching cruising speed on the motorway and settling down to follow the asphalt strip peacefully. Provided it’s been fitted with modern tyres. 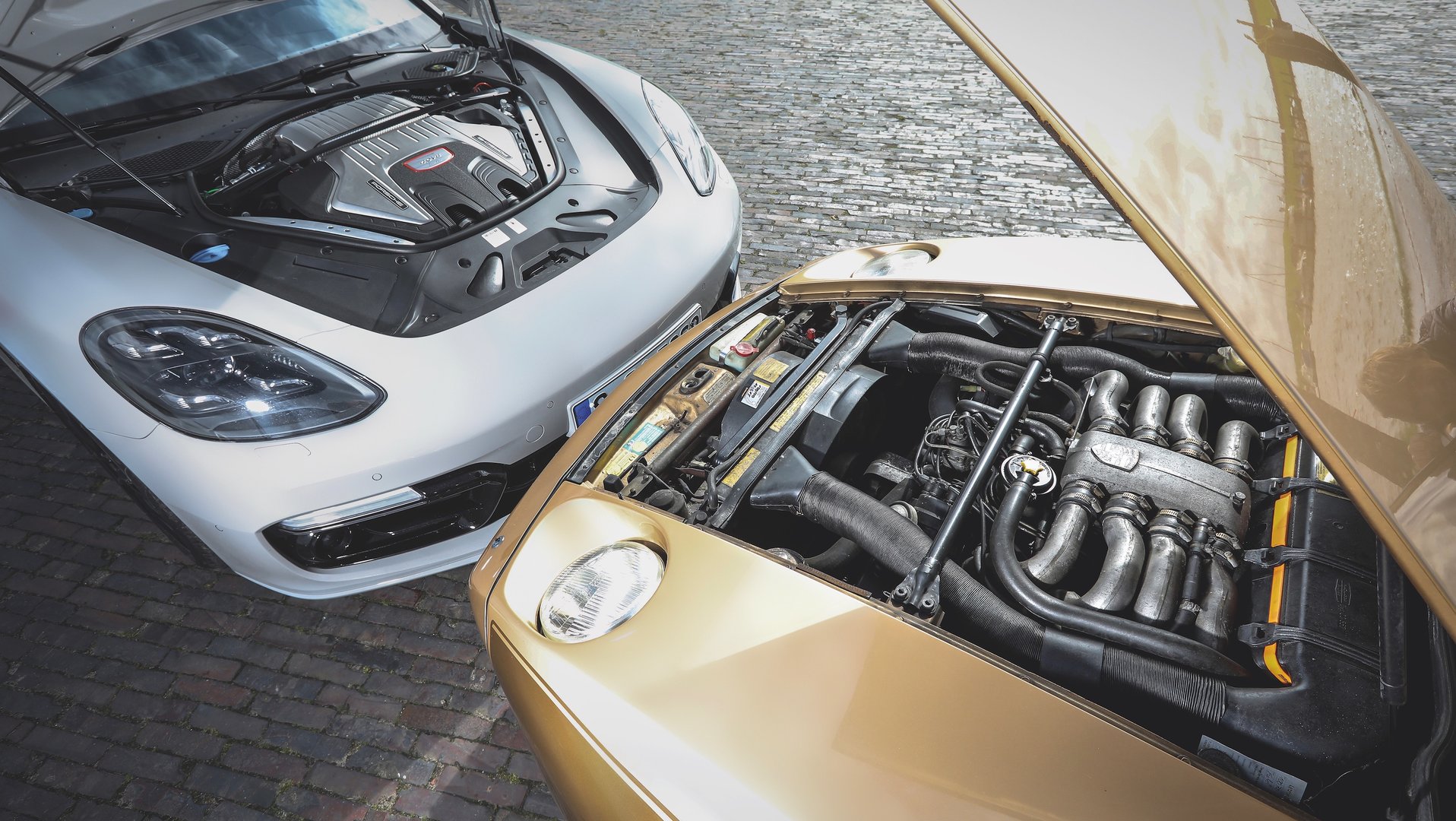 V8 engines from two different eras: Both reign supreme over the tarmac

In visual terms, it looks just as timeless as one of Charles and Ray Eames’ lounge chairs. Simple yet perfect. Anyone who finds the 928 too austere for their taste is not entirely deluded. Möbius and Lapine deliberately avoided extreme and sensational style features. Their focus was on aerodynamic and safety-relevant considerations; form follows function at its finest. The result was one of the most modern cars of the late 1970s. And yet the 928, which still commands a high price, remained a rare beast throughout its lifetime. The projected sales figures were not achieved by any of the generations of the large transaxle Porsche. It was initially calculated that 8,000 units would be sold annually, but only around 5,400 were sold in its best year (in 1987). The Porsche 928 was nevertheless one of the top-selling sports cars in its price and performance category, with over 62,000 vehicles sold worldwide.

And the Panamera? A success story from the word go. The first generation alone sold 163,500 units. Together with the new Cayenne, it represents the most digitalised, automated and networked of the marque’s cars by a long way. More importantly, however, it resembles a four-door 928. A Gran Turismo, of the sort often planned by Porsche on the basis of the 928 and 911, but only brought to life with the Panamera. Forty years after the first 928, the Panamera has now completely moved the goalposts in terms of product range. This means new scope for exploration. In the 1970s, 1980s and 1990s, Porsche could have competed with BMW, Mercedes and later Audi in the luxury saloon segment with a four-door 928. The two-door 928 was never properly up to this task. After all these years, however, a four-door 928 has now emerged in the shape of the Panamera. And it’s competing successfully against the luxury saloons. At the same time, Porsche has laid the technical groundwork for resurrecting the dream of a large, two-door Gran Turismo – a modern-day 928 which no longer needs to serve as a 911 replacement and compete against saloons. A progressive and dynamic 928 which, as a genuine Gran Turismo, would compete against the Mercedes-Benz S-Class Coupé, the BMW 6-series Coupé and the Ferrari GTC4Lusso. A two-door version of the Panamera, with the design DNA of the 928. With the same engine as the current versions of the Panamera E-Hybrid, delivering an output of 462 or 680 hp, and the ability to function as a zero-emission vehicle for short periods. 400 hp would also be sufficient. Only the plug-in hybrid would be mandatory until the first all-electric powertrain; later powertrains would then be adapted from the Mission E. In the fifth decade after the first 928, this Porsche could become a style icon to stand alongside the 911, and the coolest Gran Turismo on the planet. 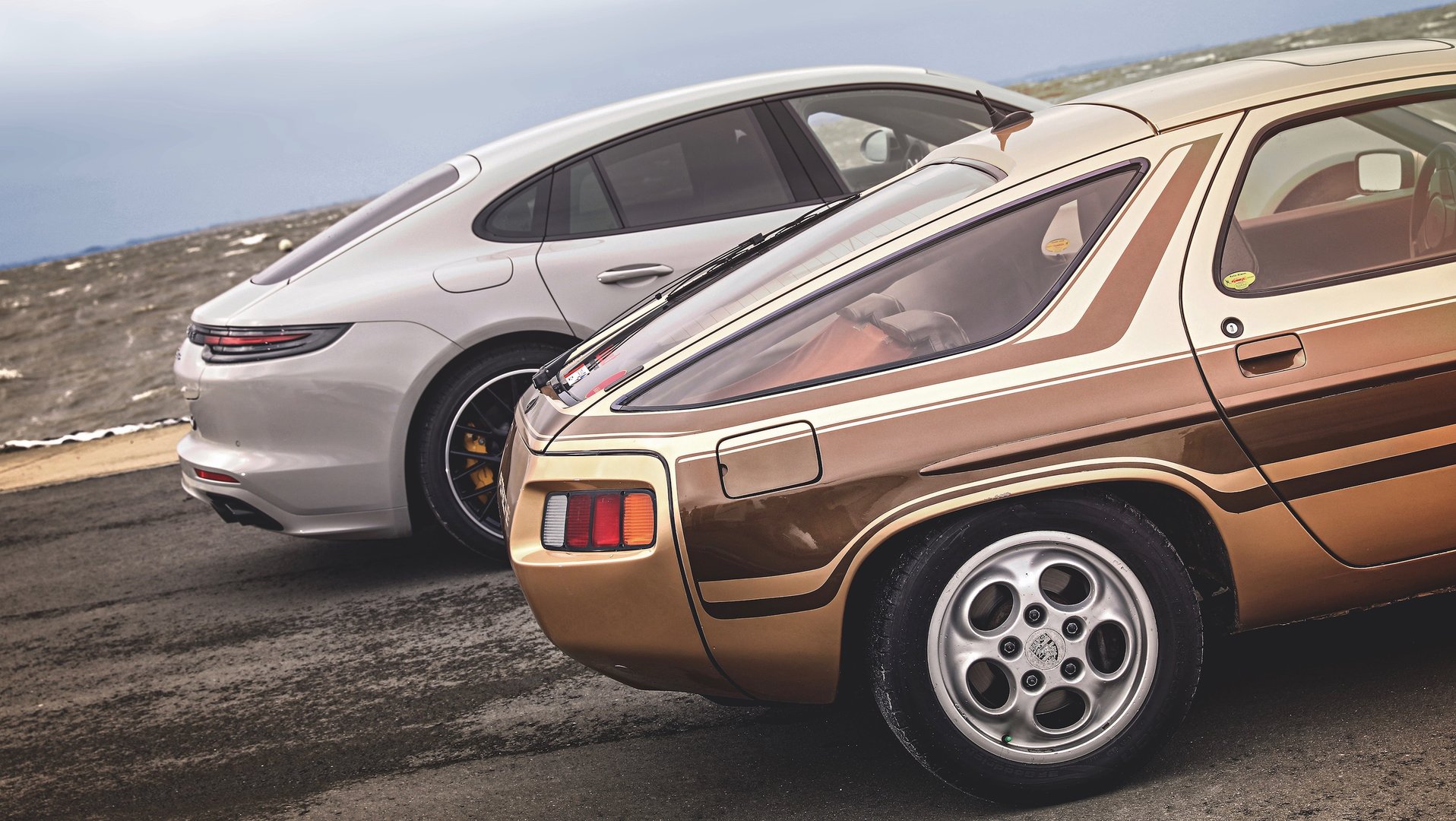 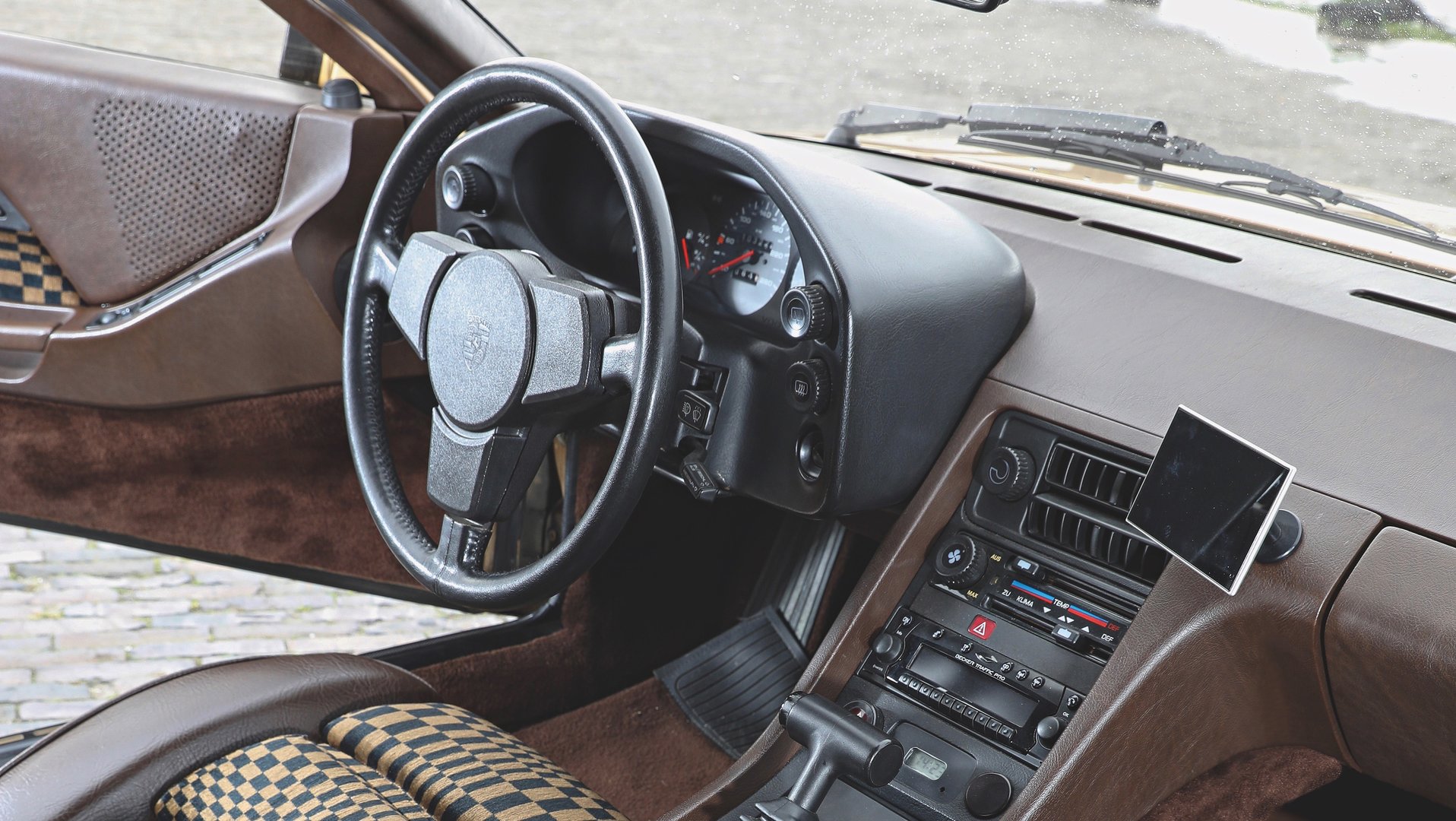 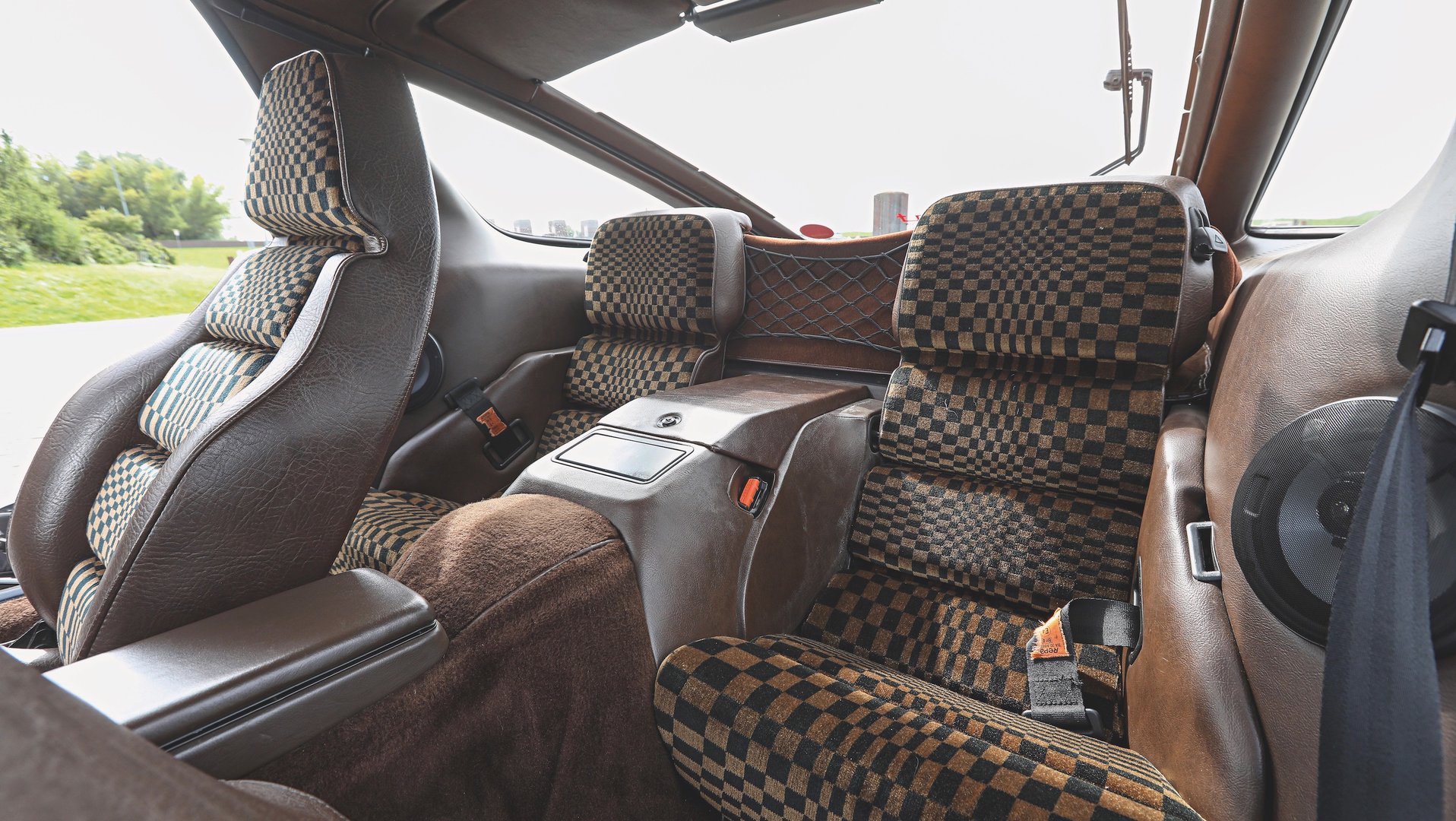 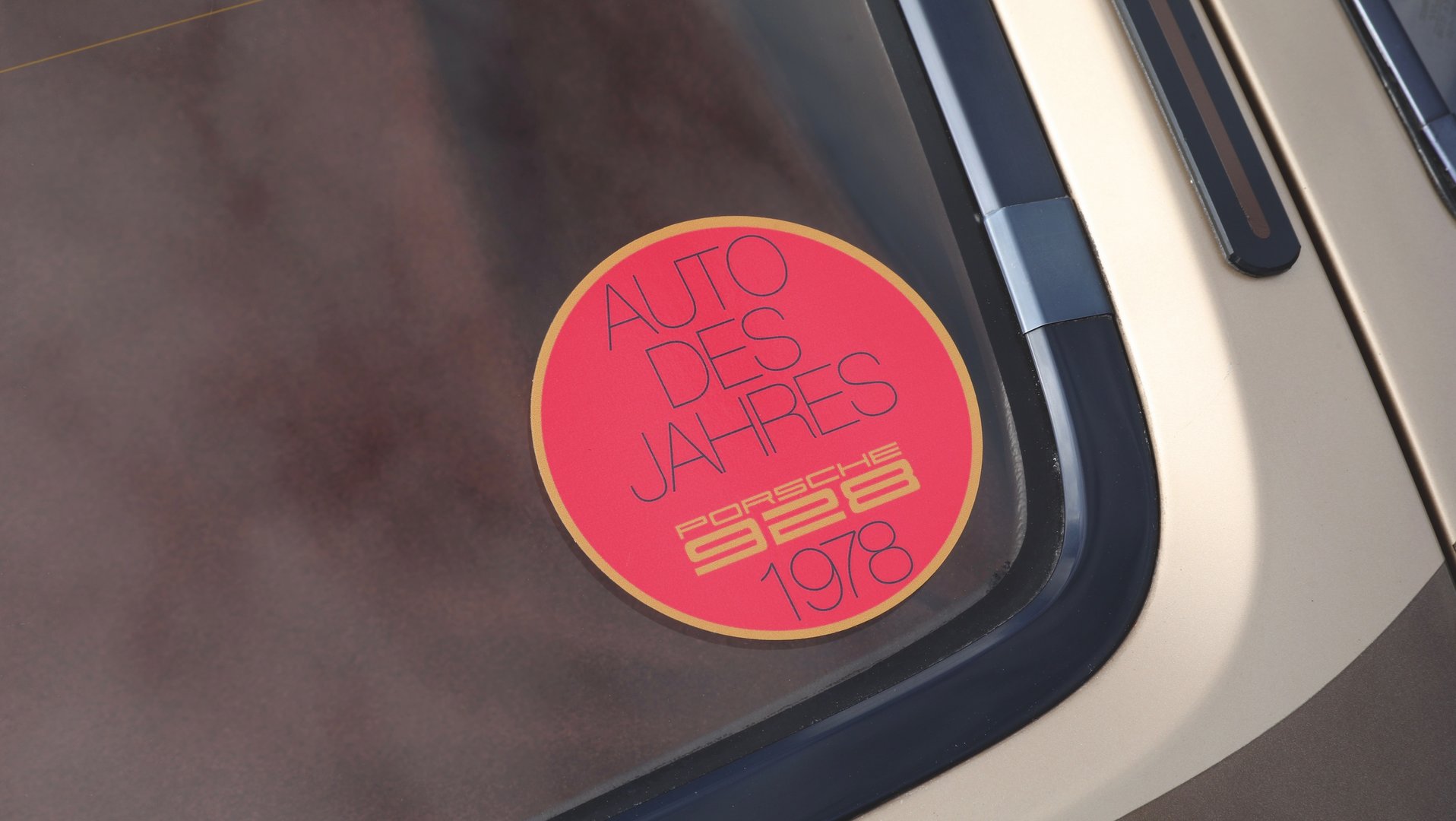 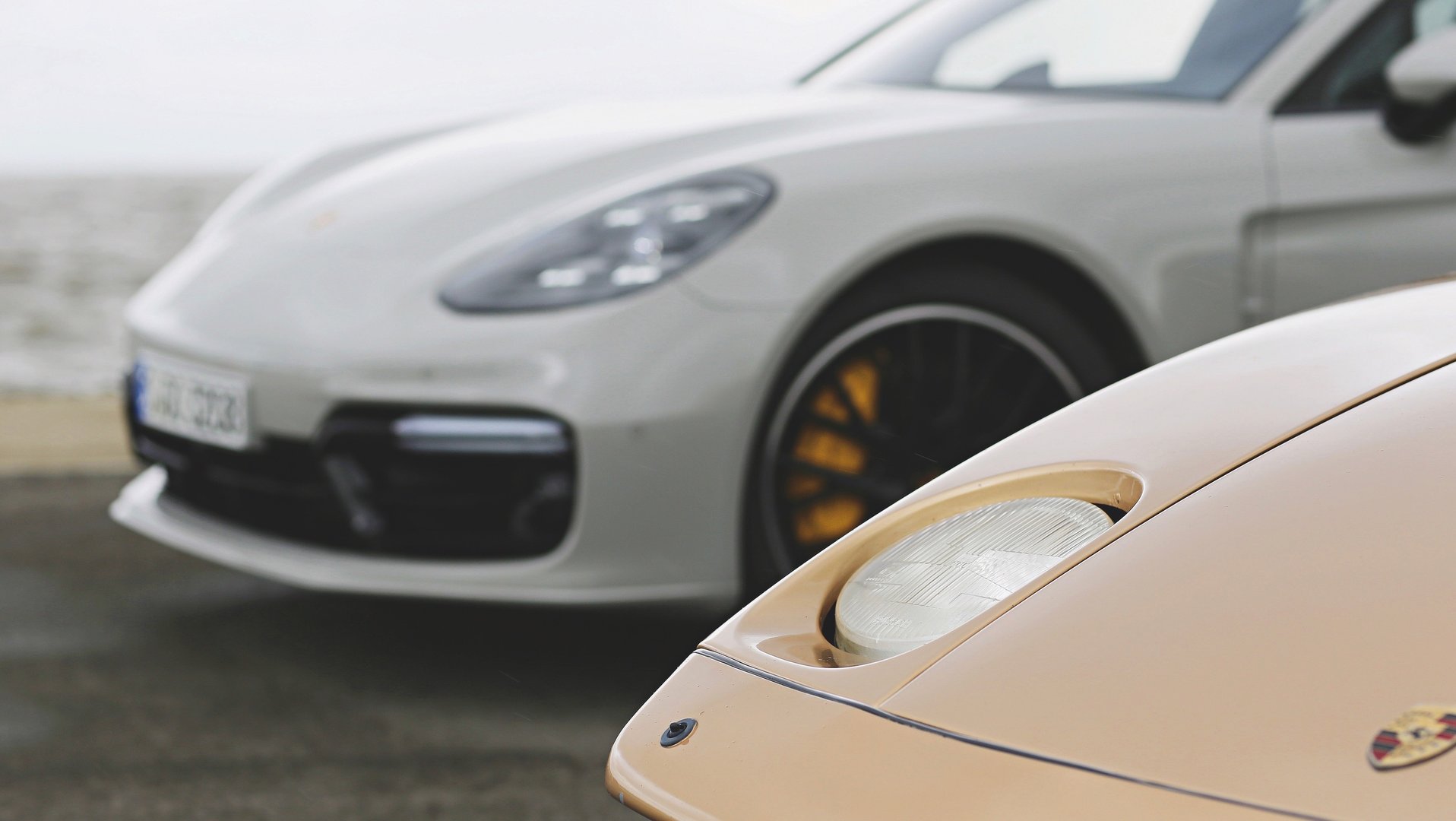 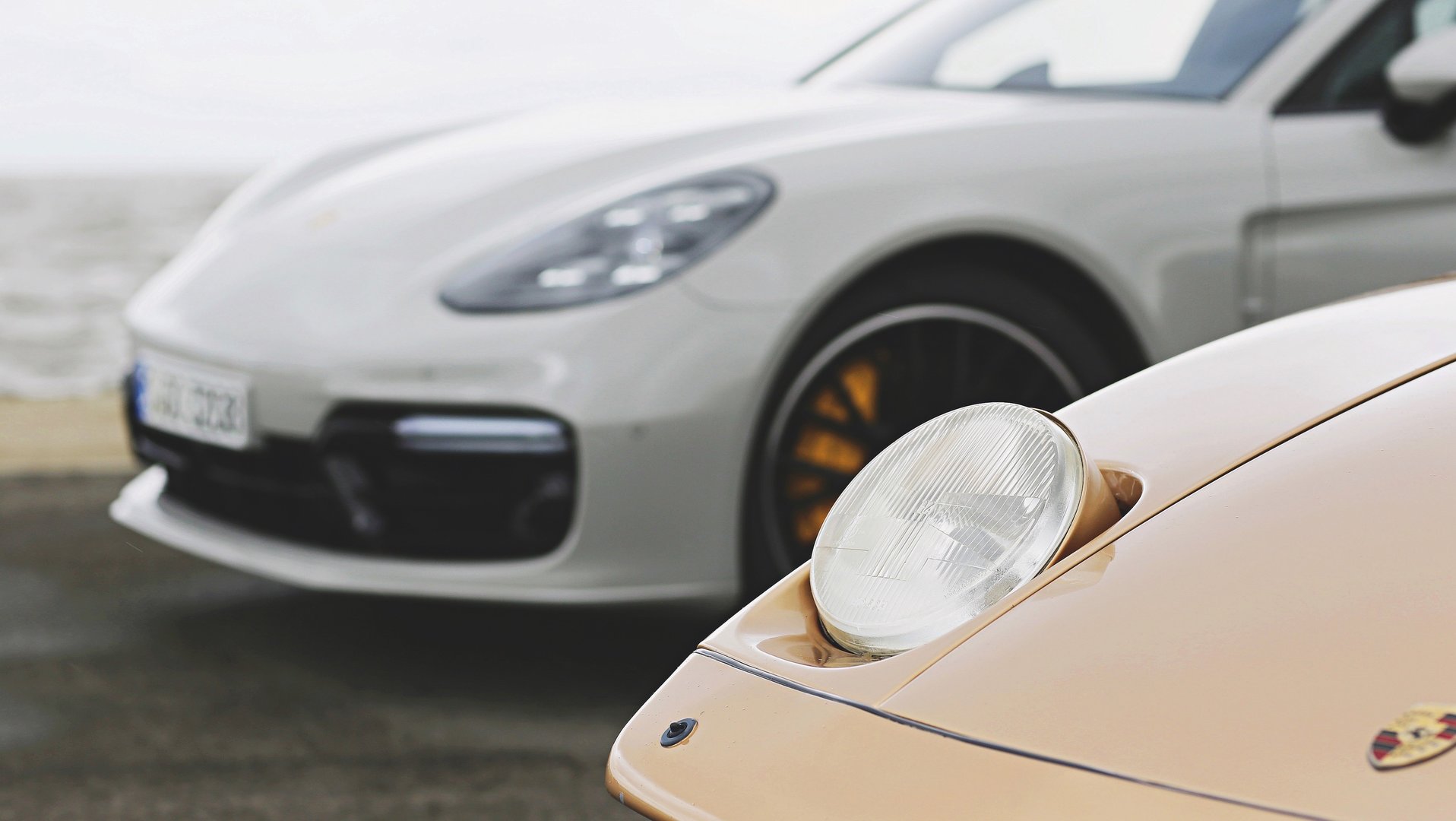 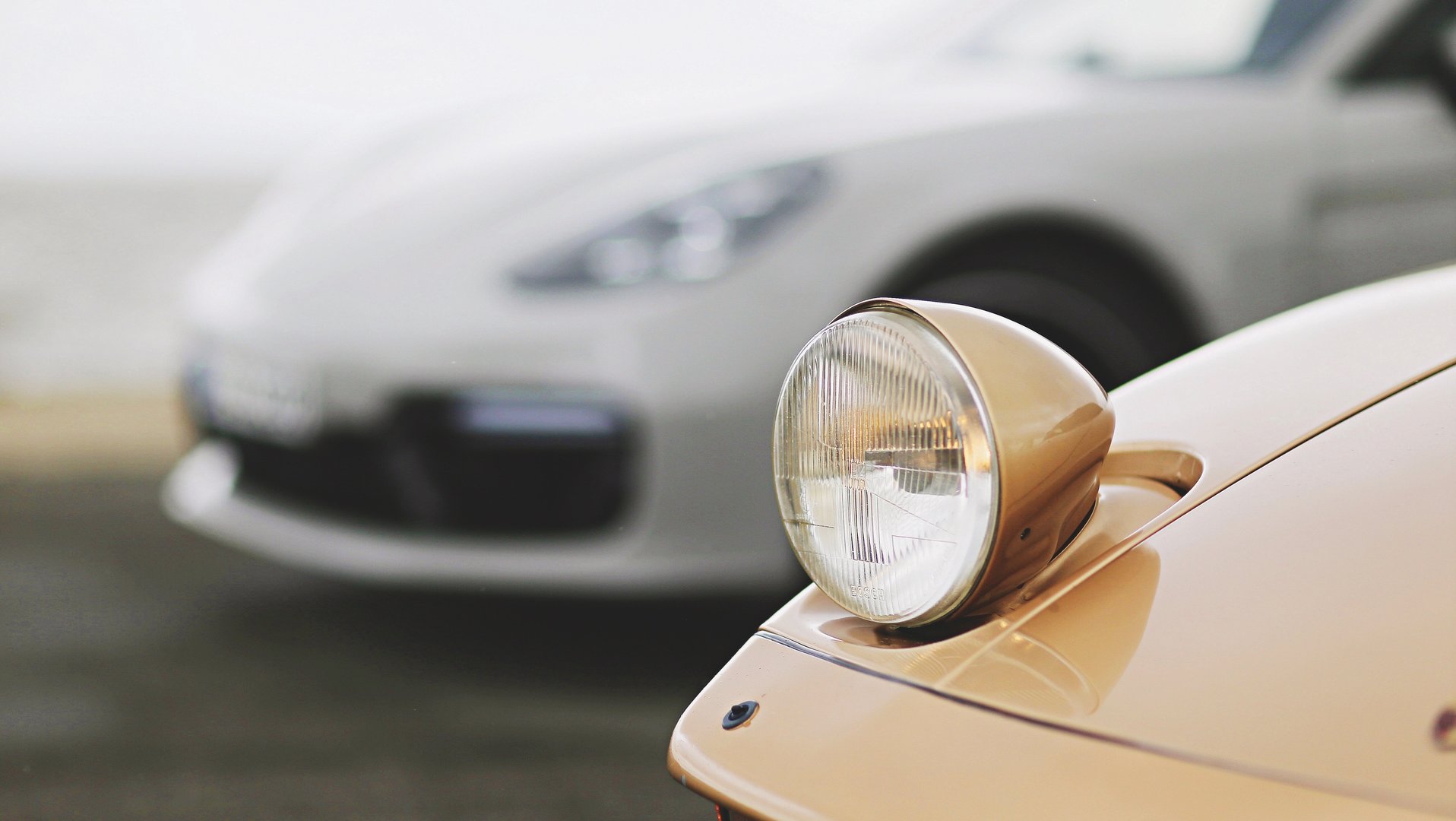 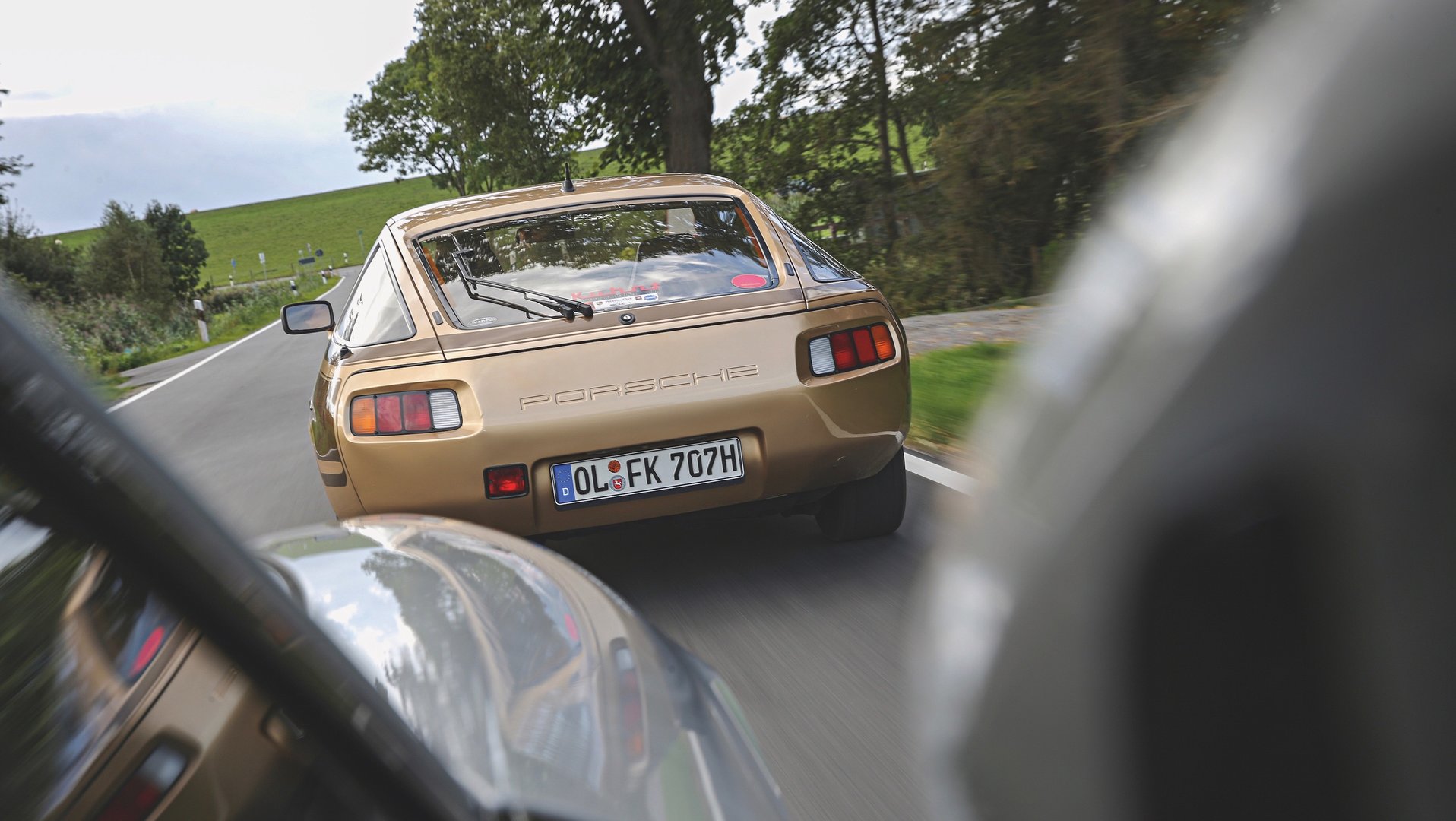