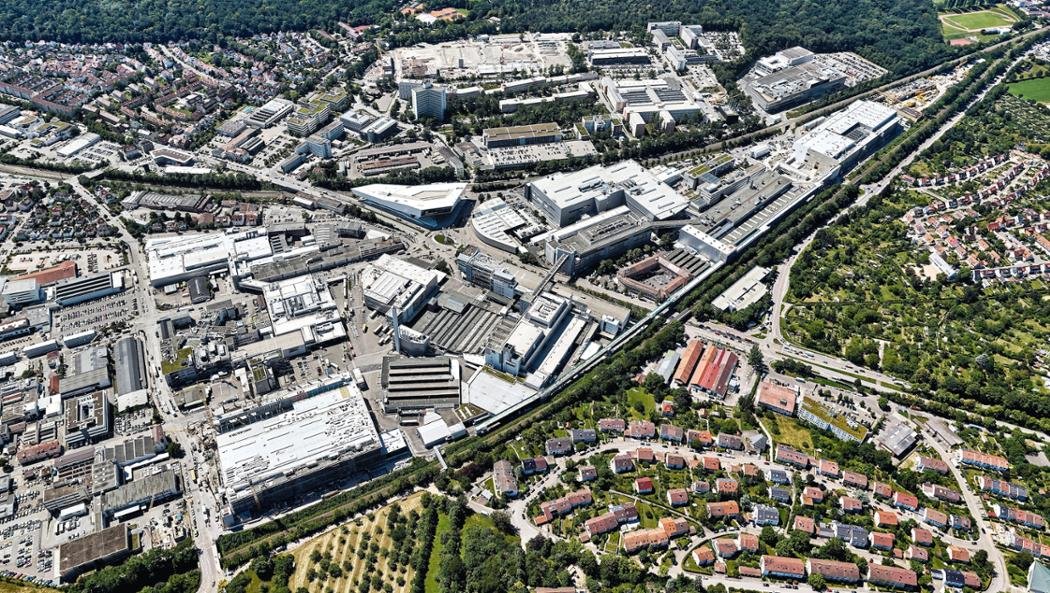 Following the decision to produce the Taycan in Zuffenhausen, Porsche is now carrying out the largest construction project of this site’s eighty-year history. The company’s historical headquarters in northern Stuttgart are being updated for automotive production of the future.

The history of the Zuffenhausen site began eighty years ago when the company known as Dr. Ing. h.c. F. Porsche KG moved from the center of Stuttgart to the northern district. The company wrote automotive history right from the start: the 0 series of what would become the VW Beetle was made in Zuffenhausen, as were three Type 64 race coupes in the year 1939. From 1950 the first sports cars of the Porsche brand were made on the factory grounds—starting with the legendary 356 and followed by the 911 in 1964. The company’s historical headquarters are now at the threshold of a new era. A factory within the factory is being built for Taycan production. From 2019 the sports-car maker will manufacture not only its current two-door vehicles but also its first standard-series car with a fully electric drive. More than 1,200 new jobs are being created. Porsche is investing around €700 million in Zuffenhausen alone.

Tens of thousands of metric tons of steel have gone into making the new body shop, paint shop, and conveyor bridge as well as the halls for assembly and logistics, electric drive, and axle production. That’s roughly the amount needed to make one hundred thousand 911 Carrera bodies. Some twenty-eight thousand truckloads of earth have been excavated at the site. And 112,000 cubic meters of concrete have been delivered. Nearly three hundred planners and as many as three thousand plant and construction experts have been involved in transporting this enormous amount of material through Stuttgart’s dense traffic and in using it at the current construction sites. The deliveries include concrete columns that can weigh up to one hundred metric tons. In short, there’s a lot going on in these weeks and months in Zuffenhausen.

“The heart of Porsche beats in Zuffenhausen,” says Reiner Luth, head planner for the factory project. Series production continues—without any interruptions or delays—right next to the buildings under construction. Luth draws a medical analogy to describe the work that’ll enable the Taycan to roll from Zuffenhausen’s production lines. “We’re basically doing open-heart surgery,” he says. Needless to say, this “procedure” poses a number of challenges.

The timetable alone is ambitious. In late 2015 Porsche made the decision to produce the Taycan at its headquarters. The clock has been ticking ever since, with series production scheduled to start in 2019. But that’s not the only challenge. “The space here is already densely packed,” explains Jürgen King, head of central construction management. He’s coordinating the project for Porsche. “For us to do the construction work, five thousand employees had to move—in about half a year.”

Porsche’s headquarters is bordered on all sides. It directly adjoins residential areas, property owned by other companies, train tracks, and streets. For example, a major four-lane street separates the assembly line from the new paint shop and the Taycan body shop. These close quarters call for ingenuity. When adding new facilities to the site in the past, Porsche built vertically—and is doing the same thing now. Production of the new electric Porsche will take place on four levels of the new assembly and logistics hall and the body shop. The assembly process will proceed from top to bottom, moving down to the ground floor where the new sports cars will roll from the hall following their final inspections. The technical systems that control all of the production processes are housed in the cellar. The result is a logistical masterpiece nearly unprecedented in the automotive sector.

Looking out at the expansion work, Luth speaks of a “gigantic challenge.” And King adds: “Given these framework conditions, what we have is not only the biggest but also the fastest-moving construction site in Porsche’s history.” The decision to expand the factory at Zuffenhausen has never been questioned. The megaproject will make the company headquarters better equipped for the future. It’s a strong affirmation of the site and its people—and guarantees Taycan customers the quality of being “made in Germany.“

The electric drive systems and axles for the first e-Porsche will also be made in Zuffenhausen. “We’re especially proud of them,” says Luth. The same applies to the goal of a CO2-neutral factory—“the icing on the cake of all these challenges,” as King puts it. Plans call for forty-two thousand square meters of green roof cover and for trees to be planted around the new factory halls. At the same time, older buildings that are inefficient and less environmentally friendly will disappear. People who visit or simply drive past the headquarters in the future should immediately recognize that Porsche places a premium on sustainability and climate protection. “When we’re finished expanding the factory for the Taycan, Porsche will produce zero-emission cars in a CO2-neutral plant,” says construction head King. “And that,” he adds, “is a well-rounded result.” 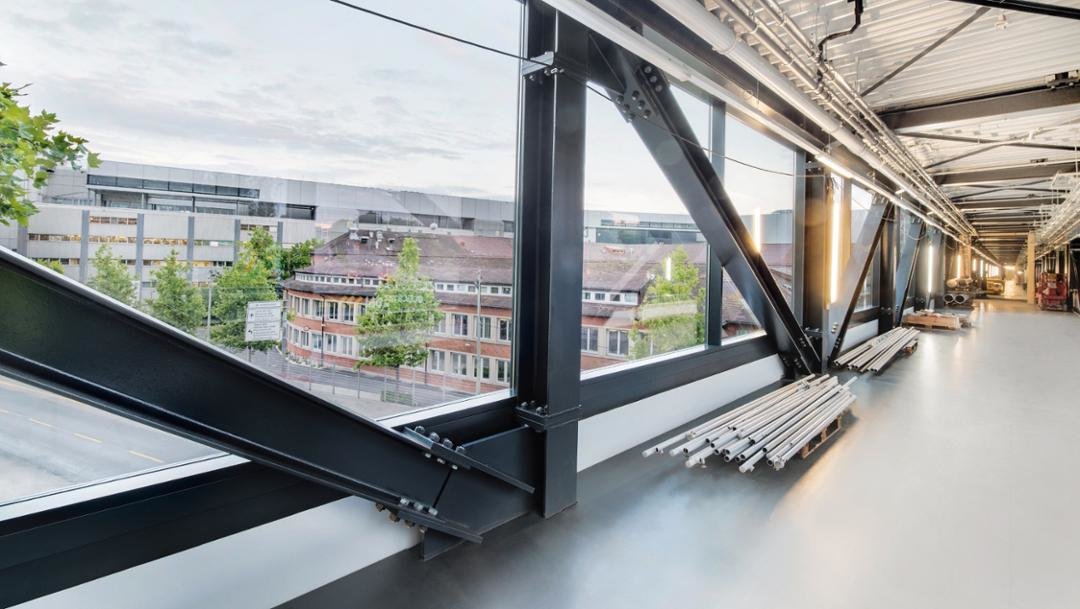 The view from inside the new conveyor bridge reveals a lot of activity at Porsche’s headquarters. New structures are being added to the old, and the red-brick building—the nucleus of the site—is surrounded by steel and glass facades that herald a new era for a company rich in tradition. In addition to classic sports cars, the first Porsches with a fully electric drive will be made here starting in late 2019. The conveyor bridge, one of the longest in the world, will transport drive system components and painted e-car bodies from the paint shop to the assembly line—at a height of twenty meters above a four-lane main road in Stuttgart that divides the headquarters in half. 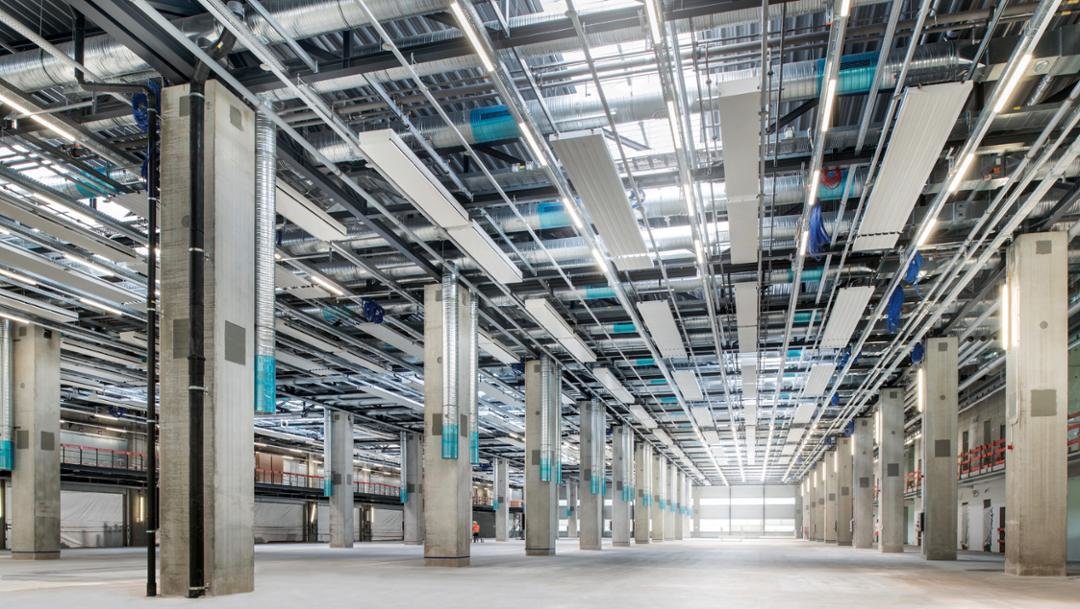 Spacious quarters for the Taycan: the new assembly and logistics hall will be Porsche’s largest building complex in Zuffenhausen. The enormous dimensions make its construction a balancing act for the planners. While the four-level structure is going up in record time, production of the 911, Boxster, and Cayman, as well as Porsche engines, continues despite the construction. Assembly systems for the new e-Porsche are currently being installed in the hall. And the first standard-series Taycans will roll from the assembly line next year. 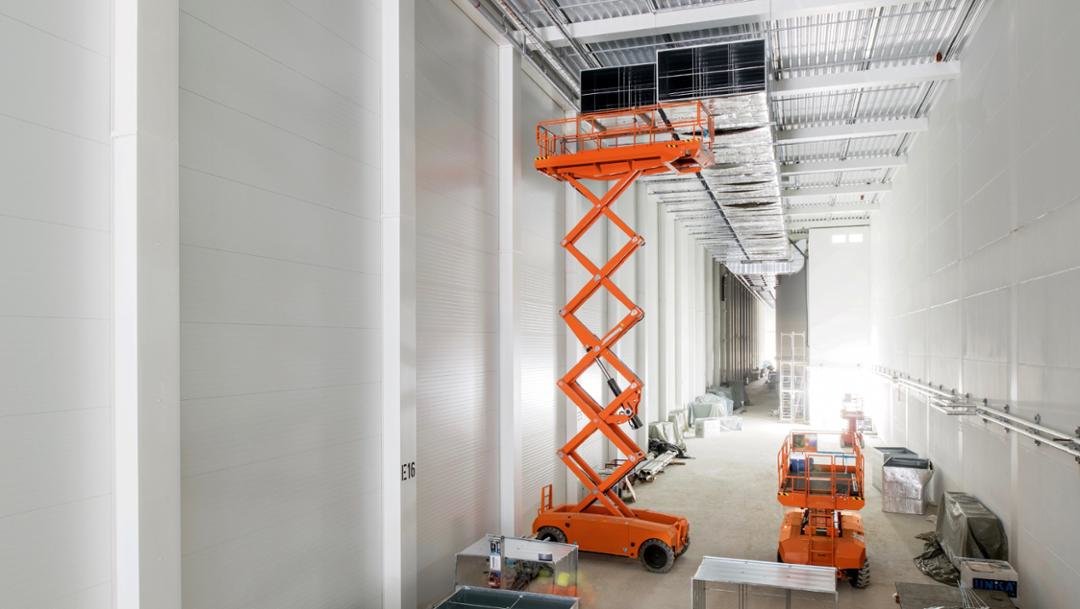 Final work on the interior—including the floor and ceiling—of the paint shop designed specifically for the Taycan is taking place while the equipment is being installed and the paint systems set up. One of the building’s special features: the steel structure is self-supporting. Length: 216 meters Height: 28 meters Material: 6,900 metric tons of steel.

The history of Porsche's headquarters

1963: Porsche expands rapidly in the early 1960s. The headquarters are developed further, and car pick-up facilities, a gate, and Plant 3 are added.

1973: After introducing the Porsche 911, the sports-car maker takes over the Reutter body shop in 1964. Five years later Building 41 is added to Plant 2.

1988: The new body shop is built. It’ll become Plant 5, which is connected to Plant 2 by a conveyor bridge. Production of the Porsche 911 Type 964 begins shortly thereafter.

2015: Six plants, a Porsche Center, and the Porsche Museum—the Zuffenhausen site now has an area of 614,000 square meters. The historical Plant 1 is just one building among many.