Of course a little engine-related black magic is also involved. “The two don’t like one another”, says Nina Vetterli-Treml. “So I never park them next to each other. The 911 thinks it's outrageous that there is a Porsche 944 there too.” She is forced to smile about having so much respect for the independent lives of her beloved vehicles. But you never know.

A visit to a Viennese suburb inevitably conjures up images of album cover photographs. The concrete grey atmosphere, dark retro sports car. Only a few rays of sunlight piercing the corrugated iron walls brighten the gloomy atmosphere. With her guitar case and platinum blonde hair, Vetterli-Treml fits this scene perfectly. It has become her daily life. “I’ve been playing bass since I helped out in a girl band for the first time as a 16-year-old,” she explains. “The guitar came later. I then bought my first Porsche, a second-hand 944 S2, when I started university. I was also working in an advertising agency at the time and I thought I could just turn that dream into a reality.” An interplay between horsepower and heavy metal that she has maintained to this day. 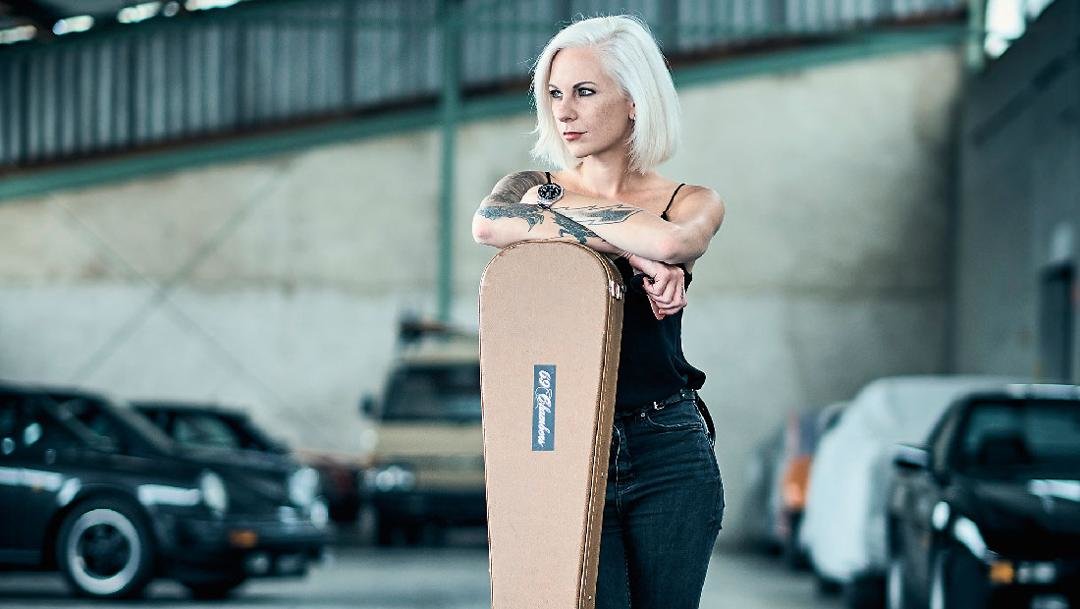 Nina Vetterli-Treml: An interplay between horsepower and heavy metal

Vetterli-Treml has driven different models since the millennium, from the 924 through to the 944 Turbo and the 911, built in 1980 and featuring the rear spoiler from a Carrera. But she is not a typical Porsche collector, and her garage is not a shrine. She was keen to gain driving experience, battling the eccentricities of her aged finds and acquainting herself with the skills of a local specialist workshop. A passion that creates suffering, she muses with a smile. “It was clear to me then that it had to be a sports car. And rear-wheel drive. I also considered various exotic cars from Italy, but Porsche’s suitability for everyday use finally won me over. It’s not supposed to be a nice second car hobby. It has to be suitable for everyday life. And it had to be slightly sensible for the journey to university.” A spontaneous fascination for the iconic Porsche shape has stuck with her. “Even as a small child, before you know a lot of brands, you see this car and know it is a Porsche.”

In her apartment, which was also her creative studio, basses and electric guitars are lined up on a sideboard, including a Flying V – the hard rocker’s instrument of choice with its trademark angled wings. Next to it is a black and white photograph showing her at a music festival in South Korea. Her name is written in Latin letters on a sheet of paper that is pasted to the windscreen of a bus. “We played in a small tent – to an audience of 8,000”, she recalls. The band is called 69 Chambers. A trio she performs in with drummer Diego Rappachietti and her ex-husband, guitarist and producer Tommy Vetterli. They are not arena greats like Metallica or Slayer, but a group marketed by a German independent record label. 69 Chambers are especially popular in France and Spain. “On the other hand, our fan base in Switzerland could be bigger,” she says soberly at the kitchen table in Vienna, where she spends some of her time these days. A Swiss band with a front woman in Austria who commutes between the Danube and Lake Zurich. No simple task. But she brushes it off. Nina Vetterli-Treml is used to life on the road. A life on the move. The group had previously released two albums before a third, “Machine”, came out at the end of May. “Machine” is a record without any ballads or musical compromises. A typical “Screw you!” album, she explains. 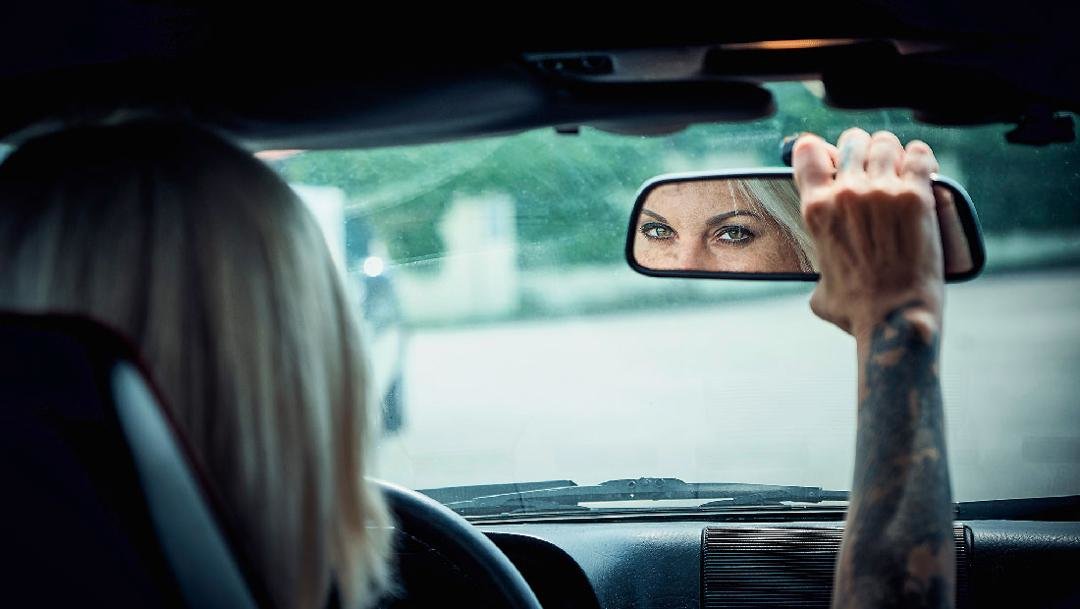 Nina Vetterli-Treml is used to life on the road

When we take a break she shows off her motor library with a high Porsche content. “I always found it important to know the background of all model series. If someone comes to you with half a fact it’s cool to know your stuff,” she says. “I’ve always been a car fan, it drove my mother crazy. She wanted to give me classic girlie toys. Dolls and things. But I wanted Matchbox cars, I blackmailed her on shopping trips and cried in public until she relented – OK, you can have your car!”

Vetterli-Treml grew up in South Korea and Singapore. Her father is a businessman. After returning to Switzerland, she soon became one of the coolest people in the smokers’ corner. Buoyed by the concerts with her trendy girl group, she had plans to study music in Zurich. But the Conservatoire featured a more classical curriculum. “My approach to music was more of an emotional thing, the academic theoretical approach didn’t suit me,” she says. She switched to journalism, improved her guitar and vocal technique in her own rehearsal room and drove her first Porsche 944 to lectures. She remained faithful to the crossover style between alternative rock, grunge and metal. She appreciated vocalist Chris Cornell of Soundgarden just as much as the music of her ageing heroes Led Zeppelin or Black Sabbath. 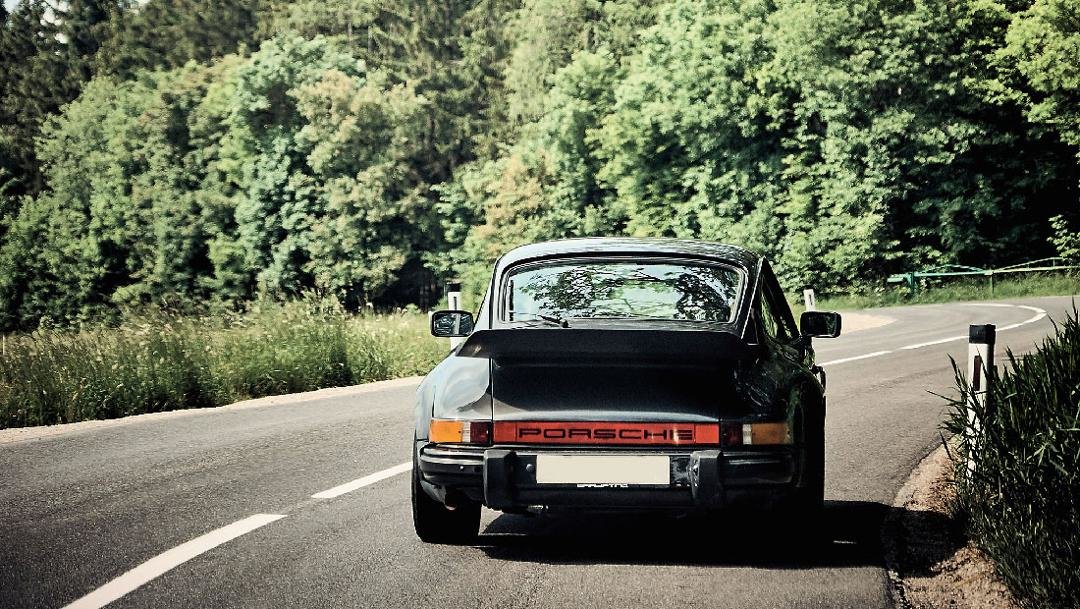 Vetterli-Treml has also long shaped her life as a crossover of her interests. The metal and the automotive scenes rarely inspire one another directly. But she draws energy from both. It is not about bold show effects or parking lot poses. Only very occasionally has she driven her black 911 to 69 Chambers gigs. A few years ago, she and her father Hans Treml published a book about Swiss involvement in international motor racing from 1950 to the present day. A standard work about legendary outsiders. This formed the starting point for a new career as a motoring journalist for various daily newspapers and the magazine show “Tacho” on Swiss television. Initially, the newcomer to the industry was eyed with distrust. People were thinking: what does she want? Now everybody knows I’m not just the heavy metal girl, but I take the job seriously.”

Things have come full circle in her long Porsche history. From 944 to 944. “I didn’t drive one for nearly ten years during the 911 era”, she says. “A few things have changed since then: In the past you always had to defend yourself for it, but now it seems to be really cool. I liked the ambiguous reputation. Just like I felt the stupid things people were saying about the 924 were often just a form of parroted posturing. You always needed a bit of courage to drive the 944 properly. I worked my way through the literature so I could put my argument forward with confidence. But I was always on the safe side with my 911. Risk-free image, generally recognised.”

Just like in pop music, it’s about style, quality and the corresponding hype. Vetterli-Treml knows this and waxes lyrical about the standard Indian Red paintwork of the 944, even though she was always on the lookout for Black or at least Anthracite. “The car wants to be used and sometimes abused. The 944 is definitely different to drive than the 911,” is her verdict. She climbs back into her 38-year-old 911 for a spontaneous outing. “I don’t drive it in winter any more. It’s really just a precaution, because it has always served me faithfully. Even in the mountains”, explains Nina Vetterli-Treml. “Now it has nearly 300,000 kilometres on the clock. After the general overhaul it will be time to work on the body. There are various rust spots and other unsightly issues to be treated. It’s a really reliable car that is no longer dropping in value.” Perhaps the 911 and 944 will then be reconciled in peaceful harmony in their corrugated iron hall in Vienna.